When your only tool is a hammer, every problem looks like a nail. This saying is particularly apt in medicine where doctors treat nearly every condition – from depression to hypertension – with a pill

If your doctor prescribed you anything other than a pill (assuming you don’t need surgery), you might think they were a quack. But this will soon change. Medicine is getting radical, and one of the radical new approaches for treating disease is electricity.

Why electricity? Well, everything you do, from walking to dreaming, is controlled or regulated by electrical signals. These tiny impulses travel through your nervous system, conveying information and allowing complex decisions to be made. The hub of electrical activity is in the brain, and from there the nerves branch out to all corners of the body.

The importance of these electrical signals is demonstrated by the impact of injury to any part of the nervous system, which often leads to irreversible paralysis. The most common trauma involves an injury to the spinal cord. Worldwide, spinal-cord injury affects about 2.5m people with about 130,000 new cases each year.

If we could find a way to read and write the electrical signals, in other words understand the language of the nervous system, we would have a digital interface to the body. An implanted device would then be able to bridge the gap left by a spinal cord injury.

And it’s not just people with spinal cord injuries who would benefit from this kind of technology. We could instruct the pancreas to produce more insulin, or we could raise or lower the heart rate without needing to resort to pills. In essence, we could take control of the body.

Luigi Galvani was one of the first scientists to realise that electricity might have some involvement in the normal operation of life. He discovered this in 1791 when he conducted experiments on frogs, making their legs twitch with electricity. A century later, the idea of an artificial cardiac pacemaker was first mooted. 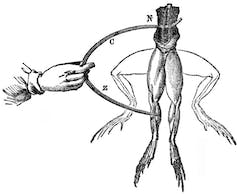 Today bioelectronics is a highly active field of research, yet in the two centuries since Galvani first made his frogs dance there are still only a handful of commercially available devices that interface with the nervous system. The most common is the pacemaker, a device that was first implanted in 1958. The patient outlived both the surgeon and the engineer who invented it.

A promising target for new devices is the vagus nerve. This nerve, which runs down both sides of your neck, is connected to many organs, and devices that stimulate it may be able to treat diseases as far ranging as rheumatoid arthritis and alcoholism.

Read more: From decapitation to positive psychology: how one nerve connects body, brain and mind

One of the key success stories has been a device for treating drug-resistant epilepsy. This device, made by LivaNova, has been used by over 100,000 people. It helps prevent the abnormal electrical activity that causes seizures within the brain by applying small electrical impulses at regular intervals 24 hours a day, every day. These impulses travel up the vagus nerve and into the brain.

More than 40% of patients fitted with this device reduce their number of seizures by half. However, the constant stimulation can cause unwanted side effects, including pain, headaches and shortness of breath.

Advances are being made

While stimulating the vagus nerve with electricity is clearly beneficial, it’s still quite a crude approach. Stimulating the nerve is like shouting an instruction rather than joining a conversation. It would be much more powerful if we could record the messages already travelling along the nerves. These messages might alert us to the onset of an epileptic seizure, for example, and enable on-demand stimulation that mitigates the unwanted side effects of the current system.

However, recording signals in a nerve isn’t easy. The vagus nerve contains tens of thousands of neurons and each electrical signal is incredibly weak and hard to detect. Coupled with this is the fact that interfering signals from muscles are often 100 times larger than the signals within the nerves.

In order to detect an impending seizure, for example, an implanted device must be able to record and identify one small signal from another, at the same time. This is not unlike being at a rock concert and trying to listen to a conversation on the other side of the stadium.

Despite these challenges, the continuing work of scientists, physicians and engineers is starting to make the dream of bioelectronic medicine a reality. Advances in electrode technology, signal processing and implant design have all played a key role. New recordings made from the vagus nerve have decoded information about breathing that might be vital in the design of devices that treat respiratory disorders.

More than two centuries after Luigi Galvani made his frogs dance, the true possibilities of neural interfaces are finally coming to fruition. And the vagus nerves are not the only targets. Research in England is aiming to restore bladder control to patients with spinal cord injury by recording signals from the sacral nerves, and worldwide there is a renewed effort to create prosthetic limbs that are controlled directly by the patient’s thoughts.

Electricity may not replace conventional drugs, but in the not too distant future, it will surely complement them.